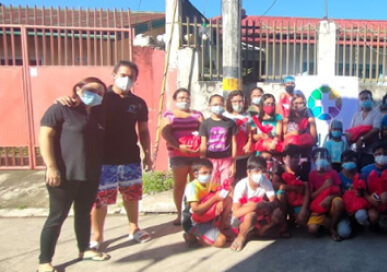 Christmas provides the opportunity to help those that are less fortunate and need more support. It’s during this time that we think about Jesus and how he helped people as well as Father Christmas or Santa Claus who gives toys away to the children of the world. It is a season during which people are eager to give to others, including friends, family, colleagues and even strangers.

It seemed to be ideal that WAOImpact would be launched in a time of giving. Giving is an act of kindness, and WAOImpact is our official ongoing act of kindness to communities and people. There is no limit to how WAOImpact will give back.

Within the Grandville subdivision in Bacolod city, Negros Occidental, Philippines there is an empty government-owned lot which are currently being occupied by informal settlers. There are 35 households that are living within the building.

Due to the lot not being purchased by the firm and the families not having their own land to put up their own homes, they have set up households within the empty lot. They are located within the private subdivision, although they are not part of the homeowners division and thus a wall separates them from the homeowners section.

These families were identified and a Christmas gift-giving programme was put together. Through discussions with the families, their needs were identified. Packs of basic necessities including items such as rice, canned goods, coffee and some other items.

On the 23rd December, 2020 we met with these families and gave out packs to hopefully uplift their lives and spirits during the Christmas season.

It is embedded in so many of our cultures that Christmas is about giving and that it’s a time to give to those that are less fortunate. Giving back to these people was an amazing experience as we know it made a difference in their lives, as well as ours. The act of giving helps both the giver and the receiver.

A Celebration of Success, A Pledge to Give Back.

Reaching Out to The Little Hearts of Gothama Child Development Centre

Building A Toilet in Sri Lanka- How We Did It, And Why